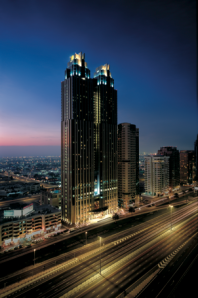 This award-winning Shangri-La Hotel, Dubai, is a luxury hotel that offers luxurious accommodations, exceptional dining and gracious hospitality in the heart of one of the world’s most dynamic cities.

Outstanding in every way.  A few minutes from the airport and just across the road from one of the 2 major malls, this hotel has everything

Being on a “Club Floor” offers many additional advantages.

I fly Emirates very often and as Dubai is their hub, I endeavor to stop off their to break up long flights to Europe.

Dubai has many fine hotels and this is one of the best.   Sandra, my wife, and I look forward to returning to one of our favourite hotels soon.  SEE MORE PHOTOS at www.johnpond.com Australia’s 1st, & oldest independent travel photo website.

All John Pond Hotel Reviews are written about hotels that I have personally stayed at and are a result of my observations.

Pioneer in television as producer of thousands of hours of TV shows on Australian and American television including Graham Kennedy, Tommy Leonetti, People in Conflict, Hollywood Bowl, Major Specials and Dr John‘s Casebook TV Shows. TV manager J. Walter Thompson & McCannErickson Advertising and head of production for Columbia Pictures TV. John changed careers to the hospitality industry working for Sydney’s top 5 star hotel as director of sales and marketing and GM. Then with Harrah’s/Caesar's World, the world’s largest hotel and casino group in Nevada. Playboy Magazine in Chicago, head of worldwide PR/Marketing, for their Resorts, Clubs, Hotels & Casinos. Producer at Fox Studios in Los Angeles. Co-creator of hit US network TV show Joker, Joker, Joker, first TV show to give away a million dollars. Writer travel articles for magazines and newspapers including Washington Post, New York Times, American Playboy as well as local Australian papers and magazines. In the USA represented many personalities including Frank Sinatra, John Wayne, Bob Hope, Mel Torme, and many other major names. John is Editor at Sea of Australia’s leading cruise magazine, Travel & Cruise writer for The Retiree Magazine, Destinations Magazine and Spectator Group of Newspapers. John reviews cruise ships, Destinations and Hotels, and is ably assisted by his Associate Editor Sandra Tiltman.
View all posts by John Pond, J.P. →
This entry was posted in Uncategorized and tagged Sandra Tiltman. Bookmark the permalink.